Haridwar is a city in the Indian state of Uttarakhand. This holy town has been a major tourist attraction for the Hindu pilgrims all over the world. The city is also known as the gateway of the Lord. The name Haridwar is derived from two words ‘Hari’ which means Lord and ‘dwar’ which stands for Gate. Located along the holy River Ganga the place is filled with shrines, ashrams and temples for people to worship and pray. 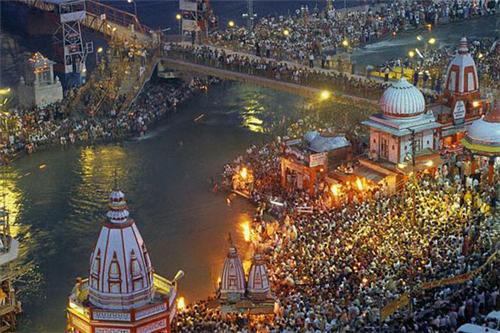 The place is also the starting point of the Chardham Yatra for which the devotees gather from every corner of the planet. The city is most popular for the Kumbh Mela fair that happens once every twelve years and the other fair is the Ardh Kumbh mela. During these fairs more than a million people come to dip in the holy Ganga River. Legend says that four drops of nectar were obtained from the ‘Sagar manthan’. These four drops fell at Haridwar, Ujjain, Nashik and Allahabad, where now the Kumbh fair is held.

The great grandson of the Sauryavanshi King Sagar, King Bhagirath is attributed with bringing the river Ganga down from Heaven. He did this as a penance for his ancestors. Lord Vishnu is said to have left a foot print behind on a stone which is now set in the Har ki Pauri, where River Ganga touches it.

Later on Hardiwar fell to the Mauryan Empire and after that to the Kushan Empire. The terracotta culture is said to have existed in this region. The city has also been mentioned in the Chinese scriptures which have called the city as ‘Mo-yu-lo’. The ruins of the city are still found in the forts and temples which were made of broken stone sculptures.

In 1868 the Haridwar Union Municipality came into exisctence. It remained a part of the Saharanpur district of the united province until the formation of Uttar Pradesh in 1947.

The city of Haridwar is situated at a height of 292.7 meters above the sea level and occupies an area of 12 square kilometer. The district of Haridwar occupies 2360 square kilometers of land. It is located at a small distance of 386 km from Agra and 214 kms from New Delhi. The Ganga River flows in various channel throughout the city.

Being such a major pilgrimage attraction for the Hindus the place is always filled with devotees and tourists. It has a major influx during the Maha Kumbh Mela and the Ardh Kumbh Mela, both of which are even covered by major news channels and travel channels. The city is also very famous for its old Hindu architectural marvel which is evident in the old forts and palaces spread through the city. Haridwar is also famous as a major foodie junction.


Read More on Tourism in Haridwar

Since Hairdwar is a spiritual spot, it is not hard to find a few beautiful items from the rich culture and tradition of India. The city offers a wide variety of shopping opportunities for the travellers. One can also find some beautiful art and craft items. The Hindu travellers will also find some pooja items and idols which they can take with them as souvenirs and place at their own house temple. Some of the major shopping areas of Haridwar are as follows

The city of Haridwar offers a variety of dining options for the travellers. Haridwar has no popular local delicacy and the people here usually eat the staple food of roti, daal and rice. The place doesn’t offer any major restaurants or hotels as such but the roadside food is very popular. One can enjoy some lip-smacking chats by the Ghats of river Ganga or some golgappe. People who love sweets will fall in love Haridwar too. The city offers some finger licking sweet dishes such as jalebi, badam milk, kheer and more.

How to Reach Haridwar

Haridwar is only 214 km from New Delhi and is very easily accessible form all the major cities of northern India. One can opt for air travel which will drop the tourists at Dehradun’s Jolly Grant Airport. From here Haridwar is at a distance of just 20 kms for which one can take a taxi or a bus service. Haridwar has its own railway station which can easily be reached via Delhi or Hazrat Nizammudin Railway station. The National Highway 45 passes through Haridwar and is very well connected with wide and maintained roads to the major towns of North India. It is a 4-5 hour drive from Delhi.