Haridwar is one of the most holy cities of India. One of the ‘Chaar Dhams’ where the sweet nectar of the holy Amrit is supposed to have spilled, Haridwar hosts the biggest celebration of Hindu spirituality in the Kumbh Mela. Truly a gateway to god, the city of Haridwar has found its place in the holy Hindu scriptures as a place where a true Hindu devotee can attain nirvana or moksh. 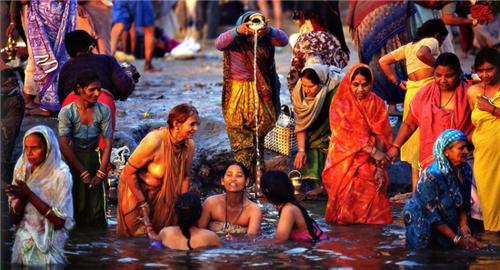 The story behind the Kumbh

It is believed by the Hindu devotees that the gods once were close to losing all their strength. In order to regain their powers, they collaborated with the demons to churn the ocean waters to bring out the ‘Amrit’- the sweet nectar of immortality, the demons helped the gods because of a deal that the nectar would be divided equally amongst all demons and gods, however at the time of attainment of the nectar, a fight broke out between the gods and the demons which went on for twelve human years after which the celestial bird of lord Vishnu- Garuda flew away with the pot of nectar.

It is said that a few drops of this nectar fell on four places on the Earth- Allahabad, Nashik, Haridwar and Ujjain. The Hindu devotees believe that every twelve years, when the new moon arrives and the stars are just right, the holy waters of the rivers in this city turn to nectar for four days and taking a dip in these holy waters can attain you salvation. This is why the Maha Kumbh is held every twelve years on a rotational basis in one of these four holy cities. After the end of the Maha Kumbh, the Ardh Kumbh Mela is held every six years following the Maha Kumbh Mela.

The main ritual followed during the Ardh Kumbh Mela is that of bathing in the holy waters to attain salvation. After the bath, the devotees wear new clothes and proceed towards the river banks to offer their prayers.

Tips to keep in mind

While visiting Haridwar for the Ardh Kumbh Mela, it is advisable that you stay in a hotel near Haridwar as the city itself will be extremely overcrowded with devotees, sadhus and travelers. Pre-booking hotels and tickets is a good plan as the city of Haridwar is engulfed with thousands of devotees who come to offer prayers at the Ardh Kumbh Mela.