Located in the holy city of Haridwar near Sapt Sarovar Ashram, Bharat Mata Mandir is an intriguing place of pilgrimage. It was the vision of Swami Satyamitranand and was also referred to as Mother India Temple for its nation-building initiative and depiction of India in form of goddess. Late Prime Minister, Smt. Indira Gandhi, on 15th May 1983, inaugurated this magnificent shrine. The statue of Bharat Mata exemplified as a women dressed in saffron colored saree with a flag in her hand, is built with marble and is a representation of undivided India. 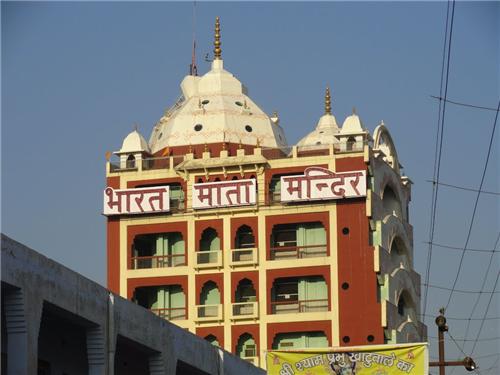 The eight-storey temple with a height measuring 180 feet is beautifully carved out of marble representing a map of India and its diverse culture instead of customary gods and goddesses. With elevators installed for the convenience of the travellers, each storey of this temple is devoted to a theme, home to various mythological legends, religious idols, freedom fighters and heroes of our nation. This temple is a way to pay homage to those who have played an important role in the formation of this vast and beautiful nation.

On the first storey of the temple, the effigy of Bharat Mata beautifies the interiors of the hall. Here the deity holds a pot of milk in one hand and a grain stack in the other representing the nature and care a mother gives to her child. With a magnificent map of India, this floor also has a potrait of Indira Gandhi launching the temple. The second floor is devoted to the leaders of India who did everything in their power to build this nation and, thus, is titled as the ‘Shoor Mandir’.

With the third storey, Matru Mandir, celebrating the accomplishments of honorable women like Meera Bai, Matiri,etc, the fourth storey is a home to the great saints of different religion and is named as ‘Sant Mandir’. The fifth storey encompasses a huge assembly hall representing secularism of India in a pleasant way. The walls of the hall reveal the historical data and the paintings that depict the natural exquisiteness of India.

The different forms of Goddess Shakti like Durga, Sati, Radha, Saraswati, Kali, etc encompasses the sixth floor of the Bharat Mata Temple. Where the seventh storey is devoted to the incarnations of Lord Vishnu, the eight floor is devoted solely to Lord Shiva along with a panoramic view of Himalayas and Sapt Sarovar complex.

Apart from its representation as a nation builder, it is also known for its unique design. Every storey is beautifully and intricately designed with white marble and has five pillars representing the five elements – earth, water, fire, wind and the space.

How to Reach Bharat Mata Temple

Bharat Mata Temple is well connected via roads, rail and air. One can reach this place easily without any fuss. Being just 5 kilomtre away from Har Ki Pauri Temple, you can reach this beautiful temple by driving down NH58 towards the Sapt Rishi Ashram via taxis,autos or personal vehicle. It is situated 1 kilometre away from the Mothichur Railway Station and 7 kilometres from the Haridwar railway station.

Here are some of the hotels near Bharat Mata Mandir: