Divided in two parts, Haridwar is a home to many pious temples. One side reigns the densely populated Mansa Devi and the other situated in the spatially distributed trees is the Chandi Devi Temple. This particular temple holds a lot of importance in the Indian culture as compared to the other holy shrines of Haridwar. 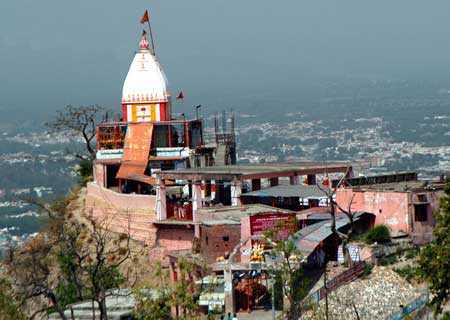 King of Kashmir Suchat Singh built the Chandi Devi Temple in 1929 at the apex of Neel Parvat. This temple is devoted to the deity Chandi Devi and is named after her. With the holy River Ganges flowing by it, the whole view of the temple looks spectacular and peaceful. This holy shrine is considered as one of the popular Shaktipeethas of northern India.

There is no historical place or temple without a history attached to it. This ancient temple is a tribute to the whole battle between the gods and devil. It was believed that the empire of Lord Indira was captivated by two demons, Shumbh and Nishumbh. These demons began to banish gods from heaven. When it was beyond any God to stop them from doing so, they decided to give birth to a powerful goddess. Thus, from the Goddess Parvati’s cells was born a beautiful deity named Chandika Devi.

The demon Shumbh couldn’t resist her beauty and wanted to get married to her but was refused. This denial by the goddess made him angry and thence started a battle. The beauty was a way to attract the demons and refuse them making them angry so that the goddess could kill those demons, first being the chief of their army – Chand Munda. After this the goddess killed Shumbh and Nishumbh liberating the heaven from the rule of the demons. Since, this took pace on the Neel Parvat, this temple built for Chandi Devi is a way to pay homage to the deity. Nevertheless, it was believed that the idol that is present in this temple was installed by Adi Shankaracharya in the 8th century.

It is believed that if you offer prayers over here with a pure heart, all your wishes will come true. This is why the Chandi Devi Temple is recognized as one of the Siddhapitha. Many tourists not only national but also international pay a visit to this place to explore its beauty, peace and the enthralling history. With the deity situated in the center, the temple is built with stairs for the pilgrims to reach easily. Various pujas are performed there on a daily basis and the main attraction is the Hawan Kund that takes place on the outside.

The magnificent temple is decorated with red flags and fresh flowers and pilgrims are allowed to light up agarbattis and earthen lamps in honor of the deity. You can even buy garlands and flowers for the pujas from the shops located on the stairs of the temple or nearby, though it is advisable to carry your own earthen lamp.

How to Reach Chandi Devi Temple

Situated at a distance of 8 kilometers from the Haridwar central station, Chandi Devi Temple is well connected and easily accessible. You can take a private or a shared cab from the railway station so as to reach the holy shrine. People who have a lot of faith in God believe to follow the path via footsteps.

The stairs lead the pilgrims to the top of the hill where the temple is located. Another way via which you can reach the temple is with the help of ropeway or the Udankahtola. The station of this cable cab service is located near the railway station and can be availed at Rs. 20 per person. With this service you can have the pleasure of being a witness to the panoramic view of the holy city Haridwar.

If you want to reach the temple quickly to worship the deity, you can take the auto bus or the personal vehicles at Rs. 170 per person. You can also enjoy the adventurous feel of the place by reaching the top via trekking and enjoy the whole scenic beauty of Haridwar.