Haridwar is one of the seven holiest cities of Hindu culture. This is the place where the Char Dham Yatra begins and has some of the most beautiful tourist spots which includes a huge number of temples. The city is also famous for its Hindu architectural marvel which is witnessed in the castles and the old mansions. The people of Haridwar are very religious and cultured. They take huge pride in their belief and faith. Many of the people here are pandits and their sons also end up becoming one. 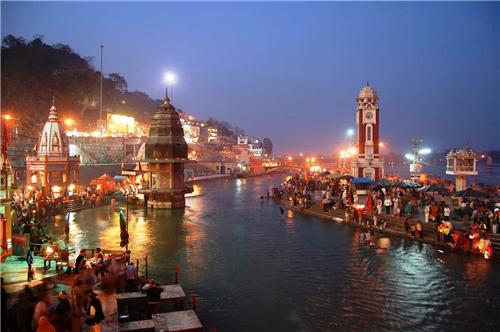 The shopping area at Moti bazar, Kankhal, Jwalapur and Upper Road provide some beautiful mementos for your trip to Haridwar. The place is filled with authentic paintings and artifacts from the old age. They also have clay made and sand made idols of god. Taking a dip in the River Ganga here cleanses a man of all his bad deeds and sins. But, apart from bathing in the River Ganga there are many more things to do in this city.

The city of Haridwar is very famous for its yoga ashrams and they are now an integral part of the lifestyle and culture of Haridwar. Almost all of them are set next to the river Ganga and they are considered to be the best place for the aged people and the spiritual folks.

Yoga is the foremost science and takes care of one’s mental, emotional and physical problems. This medication technique has been developed by India and has been in practice for ages now. There are many Yoga Ashrams in Haridwar and some of the highly reputed ones are mentioned below.
Swami Ramdevji Maharaj, who is known as Baba Ramdev, started two of these ashrams namely, The Divya Jog Mandir and the Kripalu Bagh Ashram. These organizations have helped take the science of Yoga to many corners of our planet. People who visit religious fairs also make it a point to attend one of the yoga sessions at these ashrams.

Fairs and Festivals in Haridwar

The Kumbh Mela is celebrated once in every twelve years in the holy city of Haridwar. It is the largest festival of all the festivals held anywhere in the world. In 2003, the Kumbh Mela was inflexed by 70 million pilgrims who came here to seek the blessing of the Lord. The main attraction of this festival is the act of dipping into the holy water of the Ganga River which cleanses a man of all his sins and bad deeds.

This festival is held every six years and is as important to the Hindus as the Kumbh Mela. This is also known as Ardh Kumbh or half Kumbh Mela. It attracts a very large crowd who come to worship in the name of the goddesses and gods.

It is an annual festival and the largest of all the festivals that are held every year. The festival is held in the month of July which is the holy month of Shravan in the Hindu calendar. It is held in the honor of Lord Shiva and involves a ritual named Abhisheka which is performed in the Shiva Temples set beside the holy Ganga waters. This festival involves thanking the gods for the blessings and happiness showered upon the people.

As the name suggest this festival is held on the no moon day of the month of July. This festival is celebrated with the same joy and pomp as the Kumbh Mela. Taking a dip in the Ganga River on this day of Amavasya is considered to be very holy.

This festival is dedicated to Lord Vishnu and is held 15 days after the Diwali Festival on the night the moon is full in the sky in the month of Kartik. Bathing at the Ghats of Haridwar is considered to be very auspicious during this time.