Haridwar is spread over 2360 square kilometers in the southern part of Uttarakhand. Located at a height of 314 metres above sea level Haridwar is nestled in the Shivaliks in the North and the Ganga basin in the South. Kankhal a central locality of Haridwar is located at 29.930N 78.150E and has an average elevation of 853 feet. According to mythology, Kankhal was considered the summer capital and Kurukshetra was considered the winter capital of Lord Shiva. To enter Kankhal, Lord Shiva had to go through Haridwar, the welcome gateway made especially for Lord Shiva by his devotees. 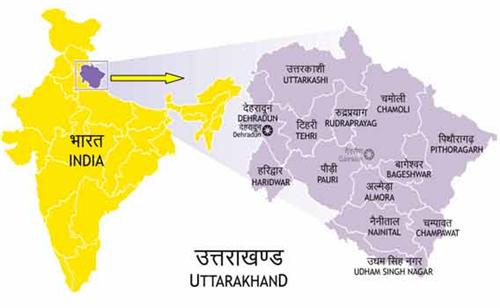 Haridwar on Foothills of Himalayas

The Ganga flows to the Northern plains from Haridwar. A largely hilly area towards the North, the region boasts of three wildlife sanctuaries namely Chilla, Motichur and Rajaji. The natural wildlife sanctuary called the Rajaji National Park is situated in the Shivaliks and covers the three districts of Uttarakhand: Haridwar, Dehradun and Pauri Garhwal.

The Ganga emerges from the mountains from the glaciers mouth Gangotri through Gaomukh and quickly makes its way down through Rishikesh and flowing rapidly to Haridwar and then further down to the plains of the North and central India where it enriches the land with water and rich alluvial deposits. The Ganga flows 253 kilometers from Gaumukh at the Gangotri Glacier to the Indo-Gangetic Plains through Haridwar.

The river water is very cold all the year round and it is mostly during the rains that the water is muddy and full of soil and mineral deposits. This rich soil settles in the plains and is ideal for obtaining, healthy rich crops. Most of the year round the waters of the Ganga are crystal clear and cool especially at Haridwar.

The Ganga River divides into a number of tributaries and distributaries that feed the agricultural fields all around. The area around these rivulets and streams is well-wooded, green and has very soothingly cool climate. It is a beautiful territory for adopting water sports and all kinds of adventure camping in fact several corporate have taken up adventure sports on the rapids in to Haridwar. There are a few seasonal steams flowing through the forest and these are called Rampur Rao, Pathri Rao, Ravi Rao, Harmaui Rao, Begham Nadi etc.

Haridwar is one of the most forested areas of Uttarakhand state besides the capital, Dehradun.

For purposes of regulations these waters of the Ganga have been engineered to harness their capacity to create natural calamities like floods. The Ganga waters have been regulated through the Ganges Canal system. The headworks of this system can be seen at Haebatpur also and which are largely located at Haridwar. The work on the Upper Ganges canal was begun in April 1842 and the canal was finally opened in 1854. This canal is a unique one because it is a half kilometer long aqueduct situated over the so main river at Roorkee. Its uniqueness lies in the fact that this aqueduct raises the canal 25 meters above the river and is in itself an amazing figure.

Thus, Haridwar has an incredible panorama of verdant hills, cool waters, arising crystal clear from the glaciers itself besides a pleasant climate all the year round. It also has the mythological power to wash away all sins and help people find themselves in the humility of the sages and ‘munis’ that throng to Haridwar every year in their thousands. It provides a serene and tranquil atmosphere for its visiting population as well as its resident population.