India has always been a mystic land of glory, tradition, mystery and colorful facets of rich culture. A destination people all over the world want to visit once in their life time. Flourishing tourism industry of the country proves this fact. Every city has a story to tell and every culture has its own variety and unique essence which makes India a place to explore for one and all.

Haridwar – a divine and exemplary ancient town, one of the seven holiest places in India located at the foothills of Himalayas, where Hindus promise to go at least once in their life span. Haridwar is located in Uttarakhand about 250 km from Delhi. 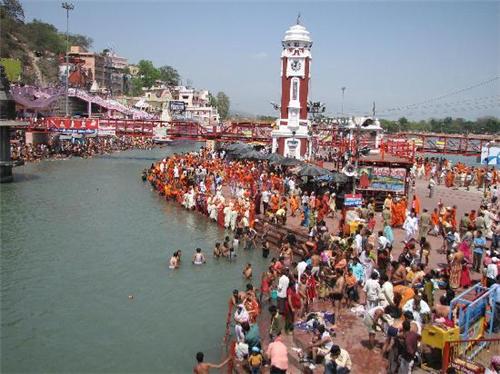 It is said “If you want to wash away the sins of your lifetime you need to dip yourself into the waters of the holy Ganges with a visit to this holy town". The ideal pilgrimage for undoing your accumulated evils. The belief goes that the “Char dham yatra” completes your journey in this life and smoothens your path to go straight to heaven. A combination of 4 most famous temples of India, Haridwar has on its ghats are the temples of Gangotri, Yamunotri, Kedarnath and Badrinath.

The specialty of this town stems from two reasons. One because River Ganga originates from the Gangotri (Gau mukh) covering a distance of 250 km, and flows into the plains into Haridwar. The second reason is that it is the oldest living city of Indian civilization and its ancient mythological findings being an area of deep interest for researchers.

Here are some of the major attractions of Haridwar:

Har ki Pauri is the most important place of Haridwar where millions of people take a dip throughout the year to cleanse their sins.

At twilight there is evening aarti performed in the temples. With thousands of diyas and flowers floating in the Ganga waters, the place lights up with is divine glory and the most enchanting and spectacular view. Millions of devotees pray during this grand aarti which starts at 6.30 pm in the evening every day.

There are lots of temples in Haridwar, but here are the few important ones.

On top of the Bilva Parvat is situated the Mansa Devi temple. Mansa means “the wish”. It is said that mansa emerged from the mind of the great sage Kashyapa and if you pray to her your wishes would be fulfilled. The pilgrims can take a ropeway to reach there. Read More

This temple is situated on Neel Parvat and is at height of 208 meters. Goddess Parvati (wife of Lord Shiva) killed Chand and Mund two demons, from which this temple was named. Read More

Popularly also known as Daksha Mandir is dedicated to Lord Shiva (mahadev). The history goes that Sati was the first wife of Lord Shiva. Her father King Daksha made this temple. This is 4 km away from Haridwar. It is also one of the oldest temples of Haridwar. Mahashivratri is the main time when pilgrims throng to this temple. Click Here to Read More

In the center of the city is situated one of the most famous temples here, the Maya Devi temple. It is also referred to the Shakti Peeths of Haridwar. Goddess Maya was also known as Adhisthatri Devi. She is a three-headed and four-armed deity who is said to be an incarnation of Shakti. It is believed that this holy temple stands where the heart and navel of goddess Sati fell.

This temple belongs to Mother India. It has 8 stories and every floor depicts a period of Indian History from the time of Ramayan till the freedom of India. Prime Minister Indira Gandhi had inaugurated it. Read More

A famous sightseeing spot, Pawan Dham is located at a distance of 2 km from the main town of Haridwar and 3 km from Har ki Pauri. This temple is made of spectacular idols and is adorned with beautiful glass work on the walls. 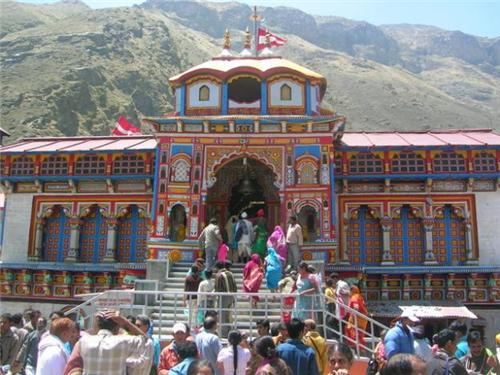 Here are some of the famous ashrams in Haridwar.

One of the biggest and most popular ashrams in Haridwar, which is also well known as Gayatri Parivar is the Shantikunj Ashram. This ashram is devoted to spiritual, moral and ethical awakening. Shantikunj is a beautiful abode, just like its name. Visitors of all faiths and castes visit this holy Ashram.

Situated on Rishikesh road this ashram portrays a lot of beautiful statues of gods, goddesses and demons and is also famous for its diorama exhibition. The well-known white statue Samudra Manthan is a must see there.

It is located in Kankhal, one of the sub-cities of Haridwar. This ashram has the Samaadhi of Anandima a noted saint of India. Satsangs and the evening aarti are performed here by followers. Read More

It is one of the important ashrams of Haridwar. As the name suggests “Saptarishis” (7 sages) named Vashisht, Jamadagni, Kashyapa, Vishwamitra, Gautama, Atri and Bharadwaja, have meditated here. The river Ganga divides herself into 7 different currents so that the meditating sages were not disturbed by the flow of water. Read More about Saptrishi Ashram

One of the biggest community events of the Hindus religion “The Kumbh Mela “is conducted at 4 different places in the country. It is the faith of millions that attending the legendary Kumbh makes one move away from in human earthly cycle of rebirth and attains “moksha” moving away from the pain or suffering of the human life.

The belief goes that in the mythological era Gods and Demons waged a war for the possession of the “potion” of endless life, during which a few drops fell in these four places. The drops of this potion are meant to have given super powers to these places and hence Kumbh is held there.

The (Ardh) half Kumbh Mela is held every 6 years at Haridwar and Prayag (Allahabad). While the complete Kumbha Mela takes place every 12 years at 4 places Prayag, Haridwar, Ujjain and Nasik. It is based on the positions of the sun, moon and Jupiter.

The main event attending this Mela is the bathing ritual at the banks of the river, along with devotional singing, feeding sadhus and the poor and holding religious assemblies.

One more architectural marvel of ancient Indian lay in holy Haridwar, the Bhimgoda Tank. Like every other place or structure of the golden age, this one is also attached to a mythological legendary story from the great epic Mahabharata. 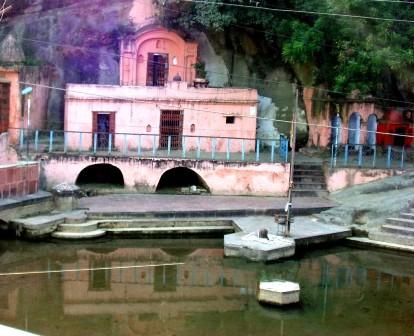 Mahabharata, that said, one of the strongest Pandava brothers Bhima felt thirsty while on their journey to the Himalayas, so he hit the rocks of this land with his knee and water spurted out of the rocks. This tank is situated just half a km from Har-ki-Pauri. Tourist and devotees are enchanted by the historical importance and the sanctity of this religious place.

At the time of the Mahabharata it may have been introduced with a different purpose but now a days the role of this tank is to regulate the flow of excess water of the Ganges. A canal has been built to change the direction of the flow of water of the tank into the Bhimgoda headwork.

Around it are beautiful sprawling gardens for one to unwind from their stressful lives. There are many several artificial fountains, small canals and swift flowing falls which has made the lovely place more interesting. Around the Bhimgoda Kund along with a dam that displays modern-day architecture built recently, there are other attractions of restaurants and shops for travelers to linger around in their leisure time.

Bhimgoda Tank is just 3.5 kms from Bus stand or railway station hence, it is just walking distance by road.

Markets like Bara Bazaar, Moti Bazaar are famous for shopping in Haridwar.

A must-visit tourist attraction, a small market with mostly religious things like prasaad, photos of gods and religious books with tiny stalls strewn all over, along with shawls, bangles, wooden and cane stuff brassware and spiritual paraphernalia.

The other markets are Moti bazaar, Ranipur Mor, Jwalapur where clothes and other religious things are available.

Yoga is the natural rejuvenation of your body and mind. The word “yoga” itself speaks of the union with the divine and the truth. Aurovalley ashram, Patanjali and Santosh puri ashram are some of the yoga ashrams in Haridwar which have courses in yoga to ensure a healthy and self-disciplined life.

Along with its religious aura, this holy city also harbors one of the biggest industrial plants of the country Bharat Heavy Electricals Ltd. It was a part of Pandit Jawaharlal Nehru’s first industrial endeavors after Independence.

It is a part of Rajaji National park, expands to an area of 240 sq km. This wildlife sanctuary is abundant with scenic beauty, with over 20 species of mammals and over 315 species of fauna. This included tigers, dears, langurs, elephants, bears, leopards, cobras, woodpeckers, cheetals and samber.

The best time to visit Haridwar is between October and April. Weather is great almost all around the year. Since Haridwar is located at the foothills of Shivalik range the winters are very cold, but summers are really hot. Temperature can go up to 410Cin summer to as low as 40C in winters.

Haridwar is considered to be a sacred land where Lord Vishnu first manifested in this world turning it in one of the most auspicious lands for Hindus. Haridwar is no doubt, the most beautiful pilgrimage destination with a mythological touch.