The name of Haridwar is attributed to the devotees of Hari or Vishnu and Hara or Shiva which is how the place came to be named as Haridwar or Hardwar respectively. It is significantly called the ‘doorway to the Lord’. 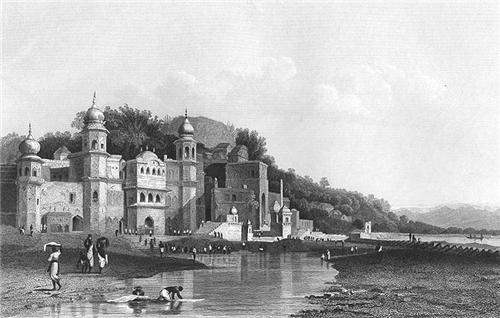 Mythological accounts report that during the war between the gods and the demons the process of ‘Samundra Manthan’, or churning of the ocean was done. During this process ‘Amrit’ or nectar of immortality was grabbed by the demons. In the chase to reclaim the nectar a few drops fell on the Earth. The four places where the drops of ‘amrit’ fell were at Haridwar, Ujjain, Nashik and Prayag at Allahabad.

This is also the reason why the Kumbh Mela is held once every three years at each of these places. Therefore it is held after every twelve years as Mahakumbh at Haridwar. The exact spot where the drop of ‘amrit’ fell was in the Bramha Kund which is at the Har ki Pauri or literally speaking ‘ladder to the Lord’. It is considered the most sacred place where bathing can lead one to attain eternal salvation or moksha.

Haridwar has been mentioned in the Mahabharata where sage Dhaumya introduces Yudhishtra to the significant tirthas of India mentioning among them the foremost ones as Haridwar and Kankhal. Another renowned sage, Kapila, is said to have an ashram at Haridwar giving it the name of Kapilasthana.

Haridwar is also the sacred site where king Bhaghiratha, an ancestor of Lord Rama, performed severe penance to bring the Ganga down from the heavens and bring about the salvation of his 60,000 ancestors who had been cursed by sage Kapila. This ritual salvation is done by all Hindus to this day as they carry the mortal ashes remains of their dearly departed relatives to be immersed in the holy Ganga.

Har Ki Pauri is believed to be the site where Lord Vishnu’s foot print is imprinted and where the waters of the Ganga constantly caress it. 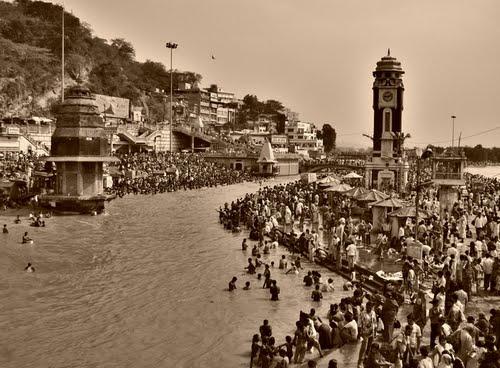 The earliest mention of Haridwar in history appears 322-185 BC when it was under the Mauryan Empire. Haridwar finds mention in the Chinese traveler, Hiuan Tsang’s, travelogue in 629 A.D. when it was under the reign of king Harshwardhana. Significant among his recollections is the presence of a ‘Gandawara or ‘Gateway of the Ganga’ temple.

Then in 1399 Haridwar fell to the Asian plunderer, Timur the lame.

Haridwar is also the site of the episode where Guru Nanak Dev, the first Sikh Guru watered his proverbial fields from Haridwar to prove his point to a local devotee who was not understanding the actual significance of the religious rituals that he was mechanically performing. A gurudwara called the Nanakwara Gurdwara has been set up at Haridwar to commemorate the event.

Akbar the Mughal Emperor’s biography ‘Ain-i-Akbari’ written by Abul Fazl referred to Haridwar as Maya or Mayapur. Akbar learnt of the significance of the water of the Ganga as being the ‘water of immortality’ and ordered that sealed jars of water be made available to him, so that he could drink it wherever he may travel. Akbar also got his copper coins mint established here.

Later on Raja Man Singh of Amber laid the foundation of the present day Haridwar. Later, two dams were constructed on the Ganga River. One of them is called Bhimgoda. The construction of the Dam had a severe impact on the course of the river. It is said that before the construction of the dam the water were high enough to reach Tehri in Garhwal making it a port town.

It is also known that the Pandas or the priests responsible for performing the various rituals at Haridwar are also the keepers of the records of various families of northern India. The Pandas maintain the genealogical records in huge ‘Vahis’ or ‘Pothis’ that are rolled up and kept away. It is interesting to note that most of the families of North India record their visit to Haridwar with these Pandas. Each family has its own lineage of Pandas who are responsible for maintaining their record.

Haridwar as the Seat of Learning

Haridwar has been renowned all over the world for its amazing range of Gurukuls, some old and some new. Haridwar may be considered to be the seat of learning where innumerable institutions have been set up for imparting learning, which imparted here would be in strict following of the Hindu scriptures or may adhere to the learning imparted in the Gurukul system of education. The institutions may also be devoted to carrying forth the Vedic traditions and the Guru-Shishya parampara.

All forms of learning on science and culture is imparted at the several institutions of Haridwar. Foremost among the traditional institution is Gurukul Kangri which has been operational since 1902.
Haridwar is known to be the miraculous repository of a number of naturally occurring, medicinal flora and fauna which are variably used in a number of its traditional concoctions.