If you are planning a trip to Haridwar you can’t miss the holy and divine Kankhal, a small hamlet about 3 miles south of Haridwar, harboring several important sacred places. It is one of the 5 tirth yatra destinations of India. For a long time Kankhal was a much larger town than Haridwar, and lots of rich Hindus had mansions in the early 19th century. Today it’s much smaller, full of ashrams and religious centres and less busy too. Lord Shiva’s winter capital was Kurukshetra and summer capital was Kankhal. Until early 19th century it was a separate town from Haridwar and Mayapur. It now falls in the city limits of Haridwar due to urban development. 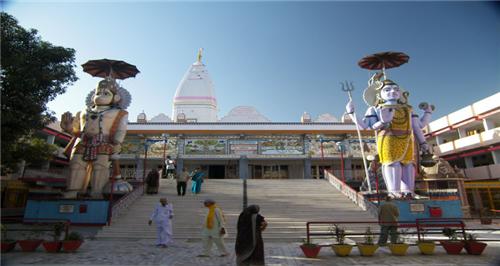 As per the scriptures father-in-law of Lord Shiva King Daksh performed a holy yagna in Kankhal but did not invite him. Shiva’s wife Sati Parvati, who arrived to attend this yajna on request of her father, was deeply offended that her husband was not invited. She felt immensely disappointed and hurt with this disrespect towards her husband. As a result of which she gave her life jumping into the fire in the Sati kund. Lord Shiva was furious on learning about this. He immediately came to Kankhal and killed king Daksh with his bare hands and following which the popular dance “Tandav” was performed in anger by him at this spot. Later he was consoled by all the gods to stay there. Lord Shiva ultimately agreed to stay back in Kankhal.

The famous Daksheshwar temple is built for him there. Pilgrims from world over visit this divine place of sacrifice and put the holy ashes of the Sati kund on their foreheads. River Ganga houses both Sati kund and the Lord Shiva temple on its banks. Not only this but Kankhal has been considered sacred also because it had the famous concurrence of the two holy rivers Nildhara and Ganga. The atmosphere at the rivers' ghats is divinely spiritual.

Places to Visit in Kankhal

The ancient temples of Baleshwar Mahadev and Shravannath Mahadev, ancient spots like Daksh Prajapati temple, Satikund, Bilkeshwar Mahadev temple are all worth a visit.

Kankhal not only houses many ashrams and temples but also has numerous old havelis and mansions which have been constructed in the last century by rich landlords and kings. These were for extended stay during their pilgrimage in summers.

Lately the ashram of famous yoga guru Baba Ramdev has also gathered loads of significance because of the very famous Patanjali Yoga University. Baba Ramdev arranges regular Pranayama camps at the ashram; many devotees from all over the globe attend it religiously. There is a free Ayurveda clinic at this ashram that attends to patients free for all over the country.

All kinds of regular North Indian Cuisines are available in many small restaurants around, but the food here is very spicy.

How to Reach Kankhal

Distance between Haridwar and Kankhal is only 5 km and travel time is 10-15 minutes. You can make a day trip and come back to Haridwar by night. You can book a taxi, or lots of buses also go from all Haridwar and all major cities. Mostly those who visit Haridwar as their main destination do a tour to Kankhal also.