Undoubtedly, the biggest celebration for Hindus, the Kumbh Mela is an auspicious gathering of Hindu devotees who believe that taking a dip in the holy waters of the Ganges can relieve them of all their sins and help them attain nirvana (moksh). A mesmerizing spiritual festival, the Kumbh Mela is a meeting of the mystical minds. Attended by millions of people each day, the Kumbh Mela brings together Hindu devotees from all over the country to disseminate their religion and discuss faith. 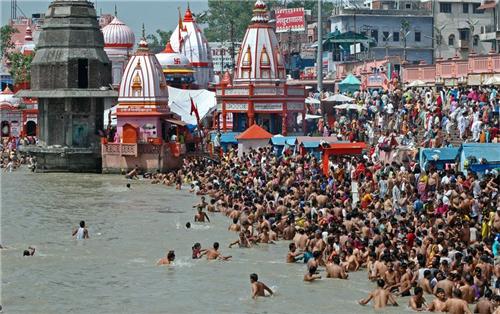 The Story of Kumbh Mela

According to the Hindu scriptures, the legend of Kumbh is a spiritual manifestation. It is said that gods once lost all their strength and it was decided that both the gods and the demons together will churn the ocean waters to bring out the pot of nectar that could provide immortality. The deal was to share it equally as the gods wanted to regain their strength and the demons wanted to attain immortality but as soon as the pot of nectar came into the hands of the gods, a fight broke out and the war between the demons and the gods went on for twelve human years during after which the celestial bird of lord Vishnu, Garuda, flew away with the pot of nectar. It is believed that a few drops of this ‘Amrit’ fell at four places on the earth – Haridwar, Prayag( Allahabad), Ujjain, Nashik.

Every twelve years when the stars are just right, the Kumbh Mela is held in one of these four places to commemorate the good over evil. It said that during the four days of the Kumbh Mela, the waters of the River Ganges, Saraswati and Yamuna turn into nectar at these four places and taking a dip in these holy waters can help you get rid of any previous sins and attain nirvana.

The Kumbh Mela is held at the ‘chaar dhams’ of the Hindu religion - the four holy cities of India, on a rotational basis.

When is the Kumbh Mela held

Theoretically, the Kumbh Mela should be held every three years, but the exact time and place depends on religious and spiritual calculations. The Maha Kumbh, however, is held every twelve years since this is the time for which the war between the gods and the demons went on for the pot of nectar. Every sixth year, an Ardh Kumbh Mela also takes place.

The main ritual of the Kumbh Mela is taking a dip in the holy waters. It is believed that at the auspicious time of the Kumbh Mela, the waters turn to nectar and taking a dip in these holy waters can absolve you and your ancestors of all your previous sins, thus, attaining nirvana, after the bath, the devotee wears fresh clothes and proceed towards the river banks for offering their prayers. The pomp and show of this mela is something not to be missed. Showcasing the true grandeur of the Indian culture, the Kumbh Mela is palpably the most attended festival of the year.

If you wish to be a part of the Kumbh Mela, it is advisable that you book your tickets early as even though special trains are started for the purpose of catering to the thousands of devotees, you still may find it difficult to get tickets for Haridwar during the Kumbh Mela. It is also advisable to pre-book the hotel preferably a little away from Haridwar as the thousands of tourists will make the city overcrowded and noisy. The best way to enjoy the Kumbh Mela would be to live in one of the nearby places and commute to Haridwar on the day of the bathing.