Constructed by Maharaja Gopal Singh of Mani Majra in 1811 to 1815 A.D., Mansa Devi Temple is among the oldest and most popular visited temples of the holy city Haridwar. Situated on the Bilwa Parvat on Shivalik Hills, this temple is the home to deity Mansa Devi, Nag Vasuki's wife and Saint Kashyap's brainchild. 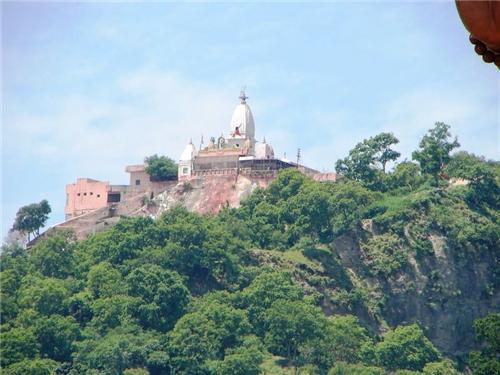 Considered of great significance to the Hindus, one can enjoy the panoramic view of Haridwar from the top of the hill. This ancient temple has known to be a home to two forms of the pious deity Mansa. One is supposed to have eight arms and the other is made up of three mouths and five arms. It is also said that this holy shrine is the zenith of the triangular Siddh Peetha created by the three sanctimonious deities – Mansa Devi, Chandi devi and Maya Devi.

Devoted to Goddess Mansa, this holy temple is actually named after Mansha meaning wish and attracts many tourists from all over the globe. It is believed that anyone who offer their prayers over here and worship with a pure heart will find their wishes to be fulfilled. There is a queue that one has to follow for the darshan of the pious deity. From the various shops located close to Mansa Devi you can buy garlands, sweets, incense sticks and fruits in order to offer them to the goddess.

It is also said that anyone who visits this temple and has a strong wish doesn’t leave without visiting the holy tree. Devotees come there to tie strands to the tree and wishes for their dreams to be fulfilled. Once they are fulfilled by the grace of the goddess, they come back to unravel the knot.

Not only known as a place for pilgrimage, the holy shrine is also a well-known holiday destination. The reason are the cable cars, more commonly known as ‘Devi Udankhatola’. These cable cars are helpful in carrying tourists from the cable booth to the holy place along with giving them an opportunity to have a complete 360o view of the beautiful and pure city of Haridwar.

How to Reach Mansa Devi Temple in Haridwar

There are many ways of conveyance via which one can reach Mansa Devi Temple. Located at 2.5 kilometers from the city’s central station and the bus stand, many cabs, local buses and tongas are available on a daily basis to take you to the temple. If you want to reach the temple while enjoying the picturesque beauty of the city, you can use the cable cars to take you there. The first cable car starts at 7 in the morning during April and October (festive seasons) and at 8 for the rest of the year. With just Rs 48 per person, travelling via cable cabs is a good experience. If you are looking for some adventure, then you can reach the top of the temple that is 1.5 kilometers in distance via trekking within a few minutes.