Located in Uttarakhand, the Rajaji National Park is spread over 820 square kilometers. In 1983 three game sanctuaries namely the Motichur wildlife sanctuary and the Chilla Wildlife sanctuary were pooled with the Rajaji Wildlife sanctuary to form the present spacious reserve which takes its name from the first Governor General of India, Shri C Rajagopalachari or ‘Rajaji’ as he was fondly called. A massive natural reserve, it presents a vast island of picturesque greenery - offering nature at its best. 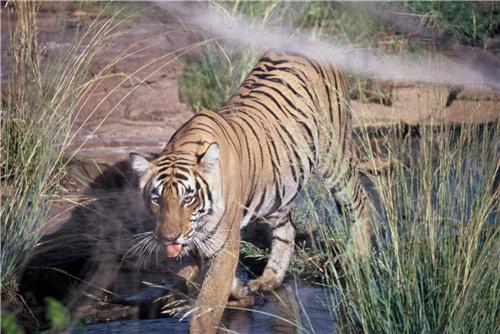 Placed in the foothills of the Shivalik finally range the Rajaji National Game Sanctuary and Park extends along the length of Pauri Garwal, through Saharanpur and Dehradun districts of Uttrakhand. The entire region is representative of the Shivalik Eco-system. While the two sanctuaries of Rajaji and Motichur are contiguously placed, the Chilla game sanctuary lies to the South and East of the two and is separated from them by the rivers Ganga and Chilla.

The rich grasslands of this region have been called the Ganga. The Motichur game sanctuary as also the and Rajaji Wildlife sanctuaries are located on the Northern and Southern slopes of the Shivalik Ridge. These slopes have a number of speedy water carrying streams that have cut ravines into the sides of the Ridge. During the Monsoon these streams are torrential while during the summer they are slow and sluggish. 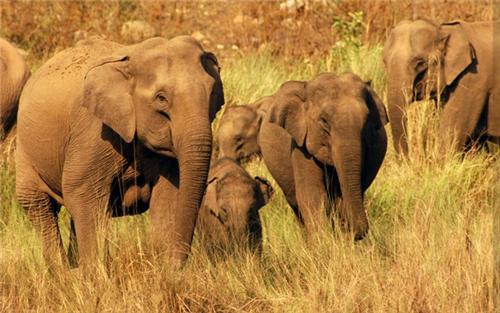 Popularly known as the Indus Ganges Monsoon Forest type, the overall forest cover ranges from the semi-evergreen to the deeply green deciduous and from the mixed broad leaved and mixed tree types leading finally to the terai grasslands.

This rich green natural heritage has lasted for centuries in untouched pristine beauty that is the virtual lungs of the state providing a rich healthy environment for its many neighbouring states. The forests are located in the transition zone that lies between the temperate and western Himalayas and the central Himalayan ranges.

A large variety of birds are visible in this huge sanctuary. Some of the rare species from all over the world congregate at this haven for bird watchers. Some of the favourites on the bird watching enthusiasts' lists can be seen here. The commonly found birds on the huge forested landscape are the Snowy-browed Flycatcher, Greater Scaup, the Great Hornbill, Pallas’s Fish Eagle, White-naped, Woodpecker, Northern Goshawk, Pale-toed Bush Warbler, Tytler’s Leaf Warbler, Black-necked Stork, Black-bellied Tern, Green Avadavat as well as the Reed Bunting.

The Rajaji National Park has on offer a number of areas that are favoured by bird watchers. The delightful viewings of the birds begin almost from the forest rest houses themselves where the tourists may be accommodated. 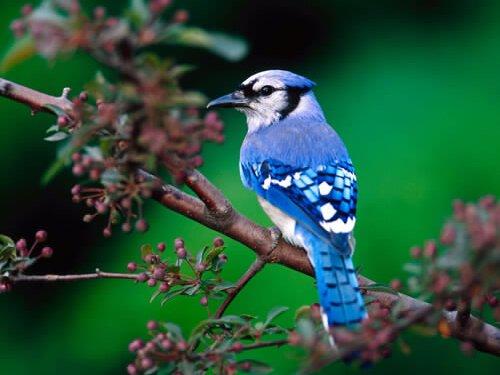 There is also the twenty six kilometers long drive in the river Chilla part of the game park area. During through the mixed forest and its verdant grasslands is a delightful run for the bird watchers.

Another of the beautiful bird watching trails of Rajaji National Park is the Phandwala – Kansrao and Motichur trails. This is a forty kilometers long trail of undisturbed dense forest. This stretch of forest has the Suswa River running parallel along its length.

The ranges of Asarori to Motichur through Phanduwala and finally Kansrao another such rich route that affords successful bird watching for the avid ornithologist.

There is yet another much touted drive that goes through the Asarori gate opposite the gate of Karvapani on the highway. It is a wonderful open for espying any member of the beautiful winged creatures who are as exquisite as they are rare to find even in their natural habits.

Sr. No. Fee and Tariff Indian (In Rs.) Foreigner (In Rs.)
Forest Rest Houses (FRH) available with the forest department:

How to Reach Rajaji National Park 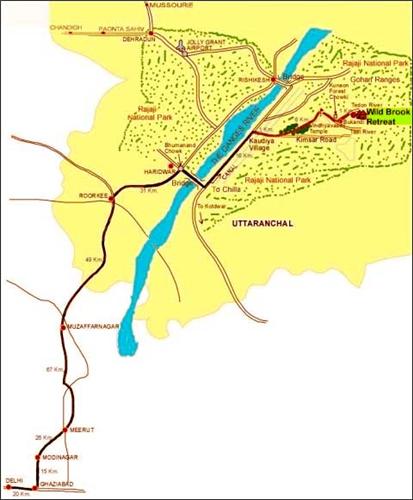 From Delhi one has to go through Meerut, Khatauli, Muzaffar Nagar, Roorkee, Haridwar to Chilla located across the Ganga river to reach Rajaji National Park.

Air: The airport is Jolly Grant Airport at Dehradun just 35 km kilometers from Haridwar. A daily flight from Delhi is a mere 55 minutes from Dehradun.

Rail: Nearest railway stations are at Haridwar about 24Kms and Dehradun at 56Kms and Rishikesh at about 18 Kms.

Road: From Delhi the Rajaji National Park is 220 kms and from Lucknow it is 510km also and from Chilla the Haridwar Railway Station is 8 kilometers where as it is 24 Km. from Rishikesh.